Skip to content
I can see the light at the end of the tunnel! We are almost through all the end of the school programs, performances and stuff. I don’t know why May is SO BUSY, but I have loved going to Jordan’s final high school concerts as well as Jacob and Noelle’s performances. This has been a particularly emotional week.
Jordan had his final performance with his Madrigals singing group. There were tears during their last song and more tears after the performance as they all hugged it out. I remember feeling a lot of those same emotions as I graduated from high school. It is sad because you know a chapter in your life is finishing–and yet I have told Jordan over and over that there will be many more friends that he will make on his mission and in college. (College was way better than high school in my opinion.)
I think it also hit Jacob that his brother is going to be leaving this week. That night after the concert poor Jacob could barely talk–the emotions were too close to the surface. Boy, we are in for a roller coaster ride for the next month before Jordan leaves on his mission! I sure love my kids and I am glad that they love each other! I don’t think I will make it through the next week of graduation with dry eyes though.
‪#‎LastWeekOfHighSchool‬ ‪#‎Emotions‬ 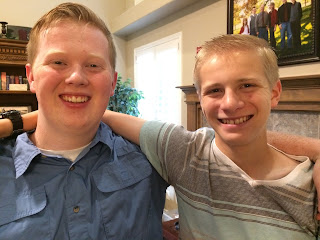