Nathan has a new little toy. It is an airplane that makes noise (like it is taking off/landing). He loves it and has been carrying it around all weekend. When my husband first gave it to him he just sat and stared at it in the box for about 5 minutes before Justin finally said, “Open it.” He did and just loves this little plane. It is hard to find things that Nathan will enjoy. He used to get a huge kick out of any visually stimulating toy that toddlers use and lately seems to be growing up and out of a lot of those things. Justin went on a trip to Japan all of last week and so he brought each of the kids back a little trinket. This was Nathan’s gift and it was a home run because he LOVES airplanes. Too bad we don’t fly very often because Nathan loves to fly and he has to sit by the window and watch the takeoff and landing.

When he was a little younger I couldn’t even drop Justin off at the airport without Nathan throwing a tantrum and wanting to go on the airplane. It got so bad that we just would not even drive close to the airport to avoid the tantrum. Sigh! The good old days! I’m glad he has grown up a little more now and doesn’t throw a complete tantrum about that anymore.
#LoveAirplanes #Autism 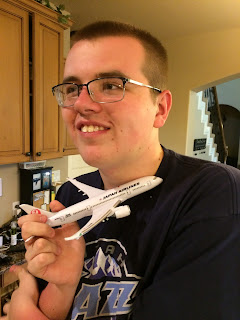 ← Tossing the PillowGame of Life →